I’d been prepared to drive Flick 125 miles north to San Jose to have a veterinary cardiologist take a look at him.  But the plan changed.

What’s that you say?  Why not take him somewhere closer?  Well, the closest guy in Gilroy (99 miles away) never called me back, and here in Fresno, despite being a city of half a million people, we don’t rate a full time veterinary cardiologist (But hey, Go Grizzlies!)

What we do rate is a twice monthly visit by a cardiologist from UC Davis, which has a veterinary teaching hospital with an excellent reputation.  As it turns out, he was going to be in town on the very day I was planning to drive up to San Jose.  So, instead of driving for 3 hours (A large stretch of it on The 101, in Silicon Valley, near rush hour.) and then 3 hours back, I spent the day at home, took care of things that needed to be done, and then drove 5 miles.  Much less stress for Flick and myself!

So a quick exam, and about half an hour of x-rays, EKG, and an echo cardiogram and we finally have something definitive to work with!  Flick has concentric hypertrophy* in his left ventricle. This basically means part of his heart muscle has been working so hard that it’s gotten too big to do its job properly.  Instead of pushing the blood along like it should, the muscle squeezes the chamber so hard that it (in the vet’s words) is ‘obliterated.’ 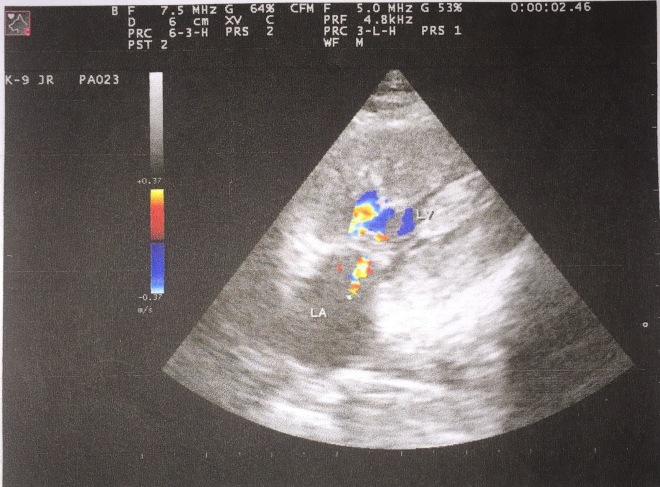 See the little yellow jet at the bottom?  That is blood being shot the wrong way out a valve because it has no other place to go!  This naturally, doesn’t make for good circulation which causes extreme fatigue and so on.

Along with this diagnosis we have a treatment plan.  The vet gave me a prescription for Atenolol, a beta-blocker that works just as well in cats as it does in humans. Flick is on a quarter of a (tiny) tablet twice a day for the next two weeks.  Then the cardiologist wants to listen to his heart again, and if things are good he’ll go to a half tablet twice a day.

I gave him his first dose last night, and it seems like he’s already feeling better.  He’s more active, was grooming himself, and while I was writing this he hopped up on the chair opposite me.  I hope this is the first step to a good, long life. 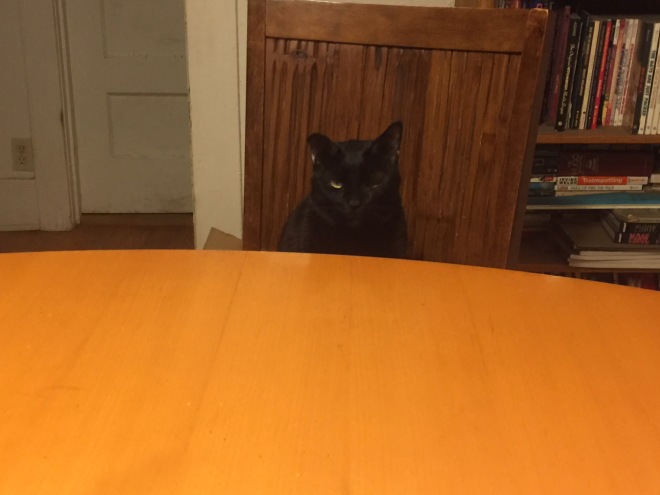 *I was going to include a link, but what I found had some pretty gruesome pictures.  Google at your own risk!

It turned out that was Flick’s last decent day. He went quickly down hill from there, first not drinking on his own, then not eating. He barely moved, and barely could move, unable to support himself.

On March 1st, 2016 I took him to the vet and hastened the inevitable. He died in my lap, his betraying heart relieved of its burden.

His wasn’t the longest life, but it was a good one.