I originally posted this on Facebook August 3 2013, pretty much the day it happened.  I’ve proofread it since then, and added some pictures.  Anything in italic is added content.

Ever heard the phrase “An adventure is something horrible that happens to someone else?” Well, my story isn’t exact that as Hershey and I both got back ok, but let me start with the moral of this story: Always bring more water on a hike than you think you need.
This morning Hershey had a very bad time at the dog park, two fights in about ten minutes. I figured it was because she hadn’t gotten much exercise this week, and it being cooler weather (It turned out it really wasn’t that much cooler) I decided to take her for a nice long hike. I wanted to go someplace I’d never been so after looking on line I found an interesting trail called San Joaquin Gorge up near Auberry. After dropping Graham off with dog park friends Karen and Robin, Hershey and I drove up to the foothills. The Google Maps turn by turn directions worked flawlessly, delivering us to a parking lot near the trail head. We made our way down the path with a quart of water to share and a soda for myself. My recollections being that the feds are pretty good about facilities along their trails. The problem was, my recollections have mostly been shaped by the National Parks or Forest Service, this was a Department of the Interior area and not very well provisioned. How not very well?  There were only outhouses and water at the trail head, nowhere else along the 7+ mile trail. 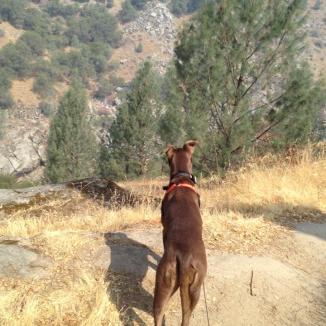 So I had a quart of water for two of us and a soda for myself and also no cell reception! It was a great hike at first, the gorge is beautiful and and foot bridge across it is really elegant. 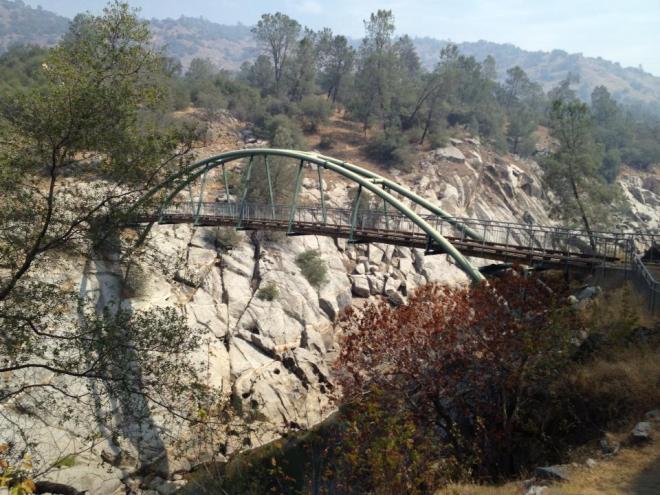 There was a fire higher up in the mountains so the whole place smelled like a cookout. Hershey was having a great time sniffing rocks and the astonishing amounts of animal poop on the trail.
I started feeling poorly on the other side of the gorge from where we had started. The uphills were more and more trying. I’d stop to rest for a while and move on. It flattened out eventually and we sat for a bit and took a rest, going through the water pretty quickly, but not totally. It was then I drank the soda and ate some cashews, and it was also then I started feeling dizzy when I stood up. We walked (uphill of course) for about 30 minutes more and after taking a wrong turn got back on the trail and headed down the way we’d came. It was mostly downhill, should be easy.
Eh, not really. This was the time it was evident that Hershey wasn’t having a great time. She would go ahead of me as far as her 26 ft. extend-i-leash would allow, always stopped in the shade (mostly oak trees). At times she had her tail tucked between her legs and was running ahead to either get the sun off her back or her feet off the hot ground. Sometimes she would seek out the deepest shade she could find and we’d take a break. At this point I was more worried about her than myself. I gave her most of the rest of the water.
Quickly after that I started feeling pretty poorly myself. We got back to the bridge but I’d taken a wrong turn somehow and came out on a trail more to the east of it than the one I started out on. I swear I was following the same trail I went up on! Once across the bridge (stopping in the middle to enjoy some shade and to briefly entertain the notion of jumping 100 feet to the beautiful water below) was when things got ugly for me.

It was a lot of up hill. It was a lot of trail with a pretty brisk tumble down the hill and into the gorge on one side. It was me feeling increasingly fatigued, resting, and feeling horribly dizzy after getting up from resting. Fun Fact: being dizzy a foot away from a steep tumble makes you more dizzy! There were a couple of times after the many rests I had that if the dizziness had been much worse I might have blacked out.
I wasn’t immediately worried about Hershey anymore, she was a trooper, I was worried about myself. There had only been one other car in the lot when we got there and I’d encountered a guy on a bike headed back that way shortly after we started. I had no cell reception the entire time I was there, and If I couldn’t get myself back up to the parking lot…
I took many rests and several times sprawled on the trail while Hershey made a beeline for the deepest shade again. I was good and ready to plead for help if anyone came along, no one did. The rest of the county being wiser than me apparently. Eventually we made it back to the parking lot, to the water, where I drank a half quart immediately, only to have my kidneys almost literally scream at me. Hershey was happy to drink from the muddy puddle at the base of the spigot and I was too tired to stop her. Let’s hope we don’t pay for that later… (There were no ill effects!)
Walking across the parking lot to the car was almost as hard as making it up those hills. I got us both in and ran the A/C for a while, still sitting in the lot. The outside temperature on the dash read 100. It could have been reading it off the pavement, but I wouldn’t be surprised if it had been the actual temp. We soaked in the blessed cool of greenhouse gas powered A/C for a while and I drove back to town.
When I went to get Graham and told my story, my friends plied me with ice water, cold packs and a Slurpee, all of which I took gratefully . So I made it back to town, neither Hershey or I much the worst for wear. She is now sacked out on the couch and I would like to restate the moral of this story: Take more water than you think you need!!

2 thoughts on “Throwback Thursday: Bring More Water than you Need!”