Right at the beginning of Spring Break my Mom needed an extra body.  She was trying to fill all the rooms at my aunt’s motel in Cayucos so she and her folk music playing buddies would have the group discount, but she didn’t have enough musicians to do so. I hemmed and hawed as long as possible before finally agreeing to be the eighth wheel. I have a long history with folk music, mostly of avoiding it whenever possible. But this would be a nice start to my Spring Break and it was going to be Marsha’s first time on the beach!

So on the last day of school while I was trying to keep order in the classroom, Mom rounded up my dogs and drove them down to my school.  Have I mentioned I have a 40 mile drive to work?  Since school was in the direction to the beach, and since I didn’t see the point of driving 40 miles to pick up dogs only to turn around and drive the same 40 miles again, this worked out well.  The beasts were good for her in the car and Hershey and Marsha were happy to meet the office staff who came out to see them.  Graham, high strung thing that he is, was feeling a bit overwhelmed.

So after that, I loaded them into My car and off we went for sand and sun.  Well, sand anyway.

While the weekend DID turn out to be a nice time, the drive over, mostly on two lane roads, in the rain, with insane/impatient local drivers was far from relaxing.  Still, even with some pit stops for myself and the dogs we got there in good time and got checked in, a bit frazzled but none the worse for wear.
My aunt’s motel, fittingly called Cayucos Motel, is VERY pet friendly to the point where every pet’s first visit they get a personalized bowl filled with treats and toys.  Humans get a nice continental breakfast and the bill.  Hershey and Graham had been before, but everyone enjoyed Marsha’s toys, and treats.

Once we got settled in the room I took the dogs out to the little pet area the motel has.  They all  sniffed around, with Marsha never noticing the beach that was right over the fence.

After that is was on to the beach.  Yeah it was gray and wet but you can’t let details like that stop you when the beach is right there and one of your pack has never been.

When I took her to Blog Paws conference in 2016 I was delighted to find that Marsha dealt with new experiences with aplomb.  If something or someone is totally new to her she will be wary at first but on the second meeting she will have adjusted.  If it’s a person she’s meeting that means the second time you encounter her you have been her lifelong friend.  If you’re something like the Pacific Ocean wariness is definitely in order for the first meeting.

As you can see Hershey and Graham are old hands, Marsha liked what she saw, and smelled but the whole “water moving back and forth” thing was a bit daunting.

The next day, after a good night’s sleep (yay vacay!) and a good breakfast we were off to do dog things

Were there any hiking trails around?  There were!  They were also off limits to dogs since they went right through bird sanctuaries.  The last thing a nesting bird needs is to have even a leashed dog stick its nose into its nursery.  Any interesting places to take them?  Well, technically they weren’t supposed to go on the pier. But technically, surfers who are too lazy to swim out to catch a wave weren’t supposed to jump off the pier either. 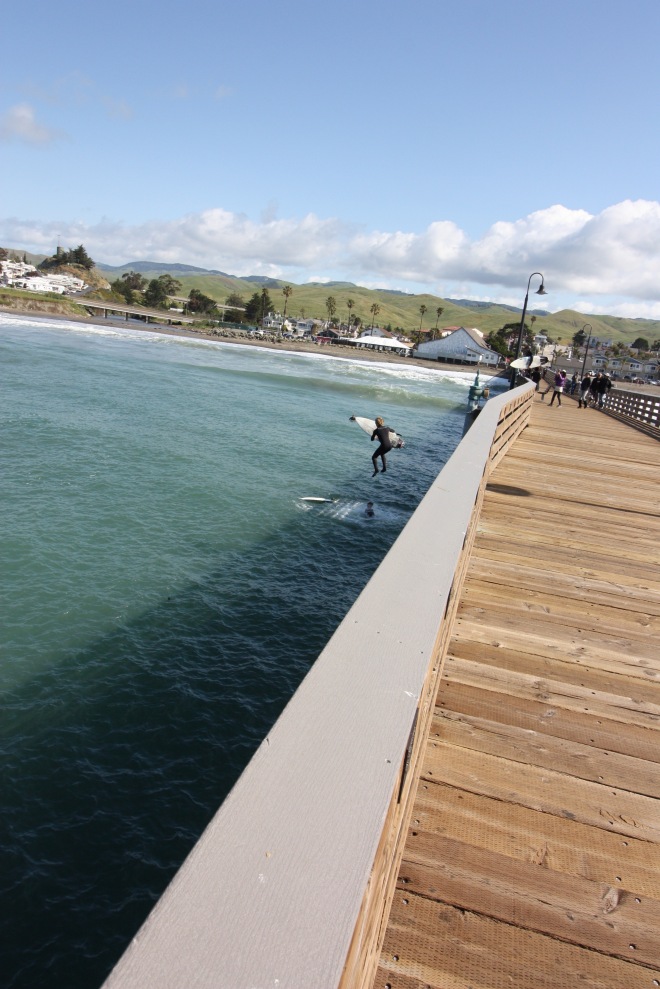 I took the dogs out anyway.  They were a little wigged out by the waves rolling underneath their feet but they did ok.

Afterwards we went to a couple of local dog parks.  There were a few dogs there, and they had some interesting things to sniff, but no reason to write home or take massive amounts of pictures.

After a nap, we went down the road a little bit and hit this big open expanse of dog beach.  Wellllllll, technically I don’t think it’s officially a dog beach, but there were plenty of other dogs running around off leash so it was time to mine go.  And go they did!

I think it’s pretty safe to say that Marsha quickly got over her oceanic trepidation and learned to love the beach and the waves.