March wasn’t what I’d hoped or expected, either in blogging or in real life.  March, quite frankly, sucked.

The first problem with March was a carryover problem from February, Hershey and her damned dewclaw.  The cut she’d inflicted on her left paw by punching through my front window had been in a place where it could be stapled.  It had healed up beautifully; I’m not even sure where it was now.  The cut on her right paw had been in the space between her dewclaw and the rest of the paw.  It was in a tricky area, basically impossible to stitch or staple so the vet left it to heal on its own.  It had other ideas.

One Friday in early March I’d stayed out later than normal catching up with a friend and then with my cousin over a drink and a few appetizers.  I was home a little after the dog’s normal dinner time, and as it had still been pretty wet I’d left the dog door open so they could come and go as the weather permitted.  Naturally they were all at the front door to greet me and I did my usual rounds of ear scratching greetings.  When I got to Marsha’s left ear I could feel instantly (I hadn’t turned the lights on yet) that something was crusty and amiss.   I turned on the lights, pulled her ear back to look and yelled in horror (OK, it was probably a shriek, but “yell” sounds more manly).  There was a huge, raw, gaping wound on the back of her ear.

Marsha and Hershey have gotten into it before, always to Marsha’s misfortune.  Hershey doesn’t mess around, she goes right for poor Marsha’s face. Marsha’s sweet little black face is salted with white from where Hershey has gotten her and the fur that grows back is traumatized.   Usually what sets this off is food, Marsha has it, Hershey wants it, Hershey gets it.  I’ve had concerns before that Marsha could lose a eye.  In that regard, a horrific rip in her ear was minor.

At first I was going to put some antiseptic powder on it and take her to her regular vet in the morning.  After a reluctant closer look I decided to get her to the pet ER immediately.  You know THAT scene, from THAT movie, probably a horror or war flick, the scene that gave you nightmares and made you vow to never watch anything from that director again?  That was Marsha’s ear.

Fortunately there is a great emergency vet only a five minute drive from my house.  Marsha was very eager to be going for an unexpected ride and even more eager to go into this brand new building she’d never seen before!  Then the door opened, that hospital smell hit her, and her eager anticipation died a quick death.

The vet was wonderful, told me Marsha would have to go under, and get stitches.  There was no guarantee she’d be done by a certain time because a case could come in that required more immediate attention.  She gave me the estimate for the treatment, and I was very thankful that I had CareCredit and that this clinic gave me a 12 month option to pay it off!  I left Marsha in her capable hands and went home to wait for the call to get come get her. 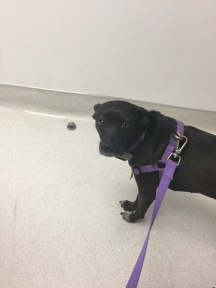 After I’d been home a while I noticed Hershey licking at her damned dewclaw again.  I took a look and saw that the wound had split open again, which gave me an inkling as to why Marsha was in the hospital.

Maybe she and Marsha got into a scrap, or maybe Marsha was trying to police Hershey’s behavior (a pretty futile task) or maybe she was just nearby minding her own business. Somehow Hershey hurt the Damned Dewclaw (yes, I’ve named it that at this point), blamed Marsha for the pain, and took it out of her in the form of ear chunks.

Somehow I managed to fall asleep, as well as forgetting to unset the ‘do not disturb’ setting on my phone.  Thus I woke up around 4 a.m. to two messages from the vet.  The first from around 11:30 saying they still hadn’t gotten to Marsha, but that she was resting comfortably.  The second was around 12:30 saying the stitching had gone fine, but there was still a part that was oozing as “there hadn’t been enough ‘material'” to sew everything up completely.  The fate of the missing ‘material’ is best left uncontemplated…

I knew I wasn’t going to get anymore sleep that night so I got in the car to get my dog.  She came out, cone and all and didn’t seem to know what to do.  I’ve heard about dogs who when put in a cone seem to forget they have bodies, and don’t know how to get around.  Marsha seemed to be going through this.  After swinging by a nearby Jack in the Box for some comfort grease and therapy syrup my little body-less dog head was home.

It took her a day or two to adjust to the cone, but soon she was jumping up on the couch and the bed and navigating expertly with the Cone of Shame.  She and Hershey were of a set as they both healed, Graham being the only dog not in a cone for a few weeks.  I contemplated putting him in one just for the sake of symmetry but decided against it.  The good news is that both girls took their pills like champs and healed up quite nicely.  In a few weeks Marsha was ready to have her stitches out, and concentrate on regrowing her fur.

Click to enlarge at your own risk, the one with Marsha’s healed ear is kinda gross.

While all this was happening with the dogs, Morph was headed down hill.  He’d had kidney problems for a while, and in February I’d had to take him to the vet and have his fluids topped off as he was getting dehydrated, even though he was constantly drinking.  This seemed like it was going to become a regular thing so I gritted my teeth and had them show me how to do subcutaneous fluids myself.  It was relatively easy and after a few times, it became routine.  After two thirds of an IV over the course of several days Morph got better.  This had been what happened with Perch too, so I figured he was doing OK.

Two weeks ago it became apparent that Morph was really struggling.  He had been very quick on his three legs, remarkably so, but now he seemed to drag his one back leg, which barely bothered to support him.  He had become skin an bones and had some sort of stinky oral infection.  All he wanted to do was be near me, which was hard because he smelled so bad.

Last week, Wednesday March 29, 2017, Morph made his final trip to the vet.  My mom asked to come with me, which I gratefully accepted.  With other cats I thought I was sparing her the pain of watching them go.  Turns out she felt bad for not being there those times.

When they weighed Morph I was horrified, he had dropped two pounds since the last time he was there a few weeks before, weighing little more than four pounds.  The doctor was wonderful, and sad to see him go, everyone in the office was fond of my three legged cat.  The vet did what needed to be done, and listened to his heart to make sure he was gone.  She declared he had been ready, and that his heart had stopped before she could put the stethoscope to his chest.

I had meant to write a letter to the cats for the blog last month.  Morph and Perch were born sometime in the middle of March of 2000.  But, with what I could tell was coming I just didn’t have the heart for it.

Perch and Eris are doing fine,  they know something is up though.  Perch especially has been extra cuddly, and bitey these last few days.  Eris too seems unusually engaging lately.  Oddly, for the pack animals that they are, the dogs don’t seemed to have noticed a member of the house is missing. 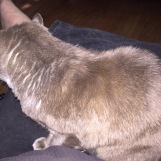 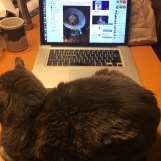 So my cat brothers made it to seventeen, if barely.  Perch seems to be doing fine, but he has the same kidney problems as Morph did, so who knows how much longer I’ll have with him.  I’ll be keeping an eye on him mentally evaluating his Quality of Life.  By the time I found and took this questionnaire most of Morph’s scores were ones.  I hope to spare Perch that fate.

I’ve spend most of the last week eating and drinking all the things.  I do wish I was a stress starver, rather than stress eater; at least I’d get some weight loss out of all my troubles. 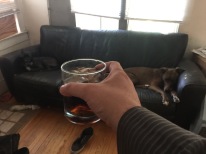 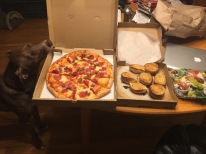 Here’s hoping for as much time as possible with the last member of the Cat Family, and many more years with the dogs and Eris.  Nothing is assured, but I’ll keep hoping.